Samsung: The Future of Retail Innovation

To drive pre-launch awareness of their flagship mobile product Galaxy S9, Samsung ran an omni-channel marketing campaign designed by their in-house agency Cheil. Central to the campaign was a pop-up physical store – the Samsung Galaxy S9 Experience Studio – located at the Utrecht train station, where 220k passengers commute every day.

Due to the short life cycle of a pop-up, it was critical for Samsung to maximise every store experience. This is where they engaged StoreDNA and Riverflex.

At the heart of this retail innovation idea is picturing the store visitor’s journey within a conversion funnel. Each moment in the shopping experience is a step towards our ultimate goal of converting the visitor to be a social advocate. The journey begins as a passer-by outside of the retail store and progresses through different zones within the store. In the case of Samsung, they progressed through the welcome zone, product tables and the experience zone. Each zone was treated as a funnel stage and we defined the key metrics tracked.

Several customer experience optimisation tests were performed based on the insights from the analysis. The Samsung/Cheil team took part in weekly retrospectives and rapidly deployed live improvements during the course of the pop-up lifecycle. The greatest impact came from navigational sticker. This optimisation aimed to increase the number of visitors to the Experience Zone. We had seen from our analysis that this was the greatest bottleneck in the funnel and an improvement here would make the greatest business impact. The Samsung/Cheil team increased visibility of the Experience Zone by placing a large navigational floor sticker at the entry gangway to the store. The results were significant, raising conversion by 1.7 basis points increase and a ~20%+ uplift after implementation. 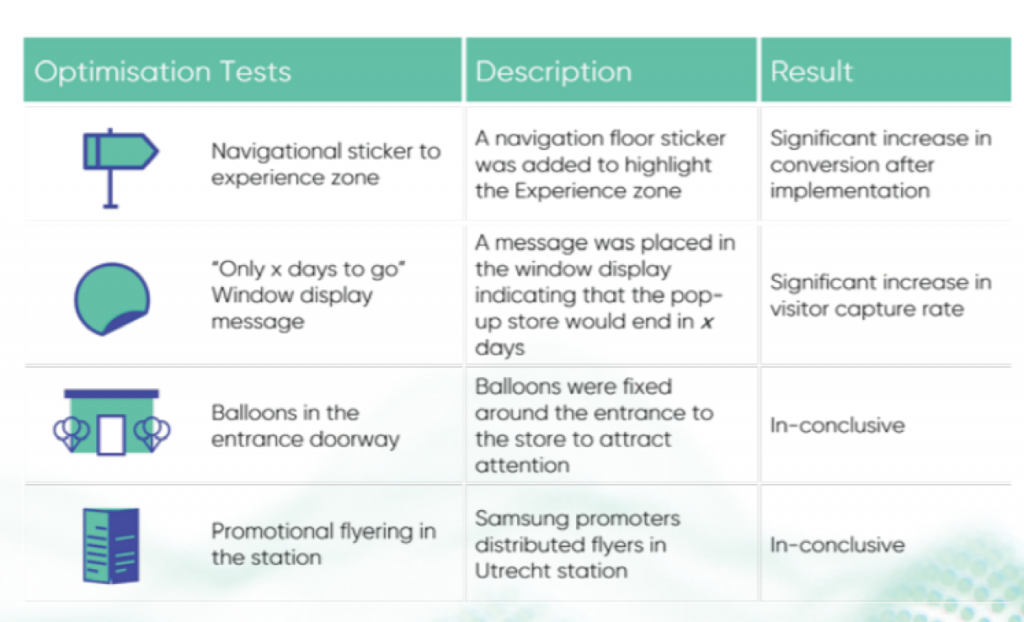 The future of store innovation

Our experience with the Samsung pop-up store offers a glimpse into the adoption of store of the future technologies within a retail innovation process. Through Samsung’s computer vision, we were able to gather data and rapidly synthesise that into action through structured and robust analysis. This is a new capability that retailers should start building now.

We wanted to not only get the data insights but also apply business actions rapidly. The agility of retailers to adapt stores to the needs of their customers is a key capability.

We reviewed data and analysis on a weekly basis, and took immediate in-flight actions during the campaign to improve results. Samsung implemented 4 optimisations of the store in 6 weeks. Two of those changes drove positive results, while the other two were in-conclusive.

Snapshot on impact made so far:

Next project
Please enter your email